According to my hand collected data, eight have been killed by cars and lorries in Greater London in 2011 so far (not five, as the BBC claims). The latest victim was Paula Jurek (20) in Camden last week who was crushed by a left turning lorry.

It might be only a question of time until someone gets hit at King’s Cross / St. Pancras. There is massive construction work going on around King’s Cross at the moment, probably in preparation of London 2012. Some traffic obstructions are inevitable, of course. 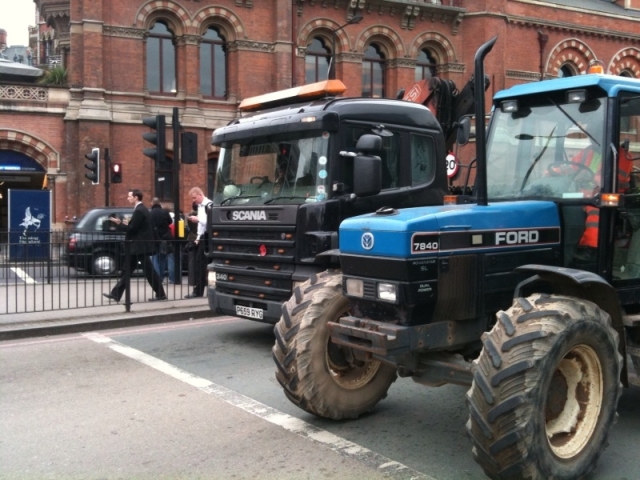 However, appartently the companies working on the construction sites don’t care at all for cyclists. I took this picture a few minutes ago at the junction of Pancras Road and Euston Road.

Pancras Road has an Advanced Stop Line for cyclists which is disregarded by both drivers. When I dismounted to take the picture, only the black HGV on the left had entered the box. The tractor (which was pulling a dreadful trailer and was turning left) arrived later. Both vehicles came from the construction site at King’s Cross.

I had a brief – and friendly – conversation with the driver of the tractor after I took the picture. I hold him that he was standing in a bike box. He looked at me in utter disbelief and did not understand what I was telling him.

This is really a shame. Unfortunately I don’t know who is responsible for the construction work at King’s Cross. Is it Transport for London? They urgently have to teach basic cycling awareness lessons to the HGV drivers working there. Otherwise some cyclist will get hurt sooner or later.