It is with deeply mixed feelings that I realised a few days ago there will be a new docking station for Boris bikes north of King’s Cross. It will be on Crinan Street right next to King’s Place, where the Guardian resides. It looks like it will be opened soon.

On the one hand side, it’s really good to see the expansion of the cycle hire scheme in the King’s Cross area. The network of docking stations is particularly patchy in this part of the city. Although I’m only a very casual user of the scheme (I prefer to use my own bike) it’s very convenient to have a docking station right next to my office on Crinan Street.

On the other hand, the new docking station really gives me shivers. If you want to use it, you have to ride your bike on one of the most notorious and cycling unfriendly areas of central London – the infamous King’s Cross gyratory.

If you happen to be south of Euston Street, you are forced to cross the junction where Deep Lee, a 24 year old arts student, was crushed by a lorry when she cycled to college on 3 October 2011. Since 2006, three other cyclists were killed by lorries in the area. Pedestrian and cycling campaigners have been fighting for years for a more human friendly redesign of the area but Transport for London did not bother to take action. They were more concerned about smoothing the traffic flow than improving the safety of cyclists. In December, the Camden New Journal reported about a special town hall meeting in Camden:

A TfL representative insisted that introducing a cycle lane at the junction would “cause considerable queues”, stressing that there was “limited time” to conduct a review of the proposed changes for the junction because of a “commitment” to make them in time for the Olympic Games.

Some improvement works at the dreadful junction are about to begin, but James Thomas, an architect and cyclist working on York Way who had a close look at TfL’s plan, says the changes fall short of any real improvement. James, who built the memorial bike for Deep Lee, concludes that the plans bring

no improvements in safety for cyclists

The new docking station north on York Way will lure Boris bikers to an area that is loathed even by very experienced cyclists. Many of them are tourists or otherwise inexperienced cyclists who are not familiar with the bewildering system of one-way streets around King’s Cross and are not aware of the build in dangers for cyclist on the roads around King’s Cross. To quote an infamous sentence by Boris Johnson, they will find is amazingly difficult “to have their wits about them”. 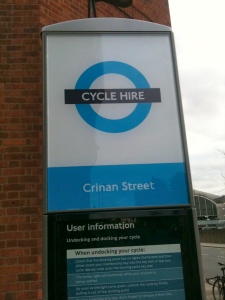 There are no bike facilities on York Way whatsoever and cycling there is absolutely counter intuitive. Between Euston Road and Wharfdale Road, the left lane is used as a bus stop. Northbound cyclists who keep left happen to be squeezed in the middle of the traffic: busses on their left, fast moving cars and lorries on their right.

I cycled there quite often and came to the conclusion that the “safest” way to ride there is if you position yourself on the road like a cyclist in Europe would do: I keep on the outer right lane next to the curb.

However, if you want to carry on north behind Wharfdale Road, you have to cross two lanes of car traffic because York Way ceases to be a one-way street there. To get to the docking station on Crinan Street, you have to cross York Way with its four lanes of fast moving, aggressive drivers. (The better way to get to the docking station is a right turn onto Wharfdale Road and then a left into Crinan Street, but tourists and people not familiar with the area won’t know.)

I consider myself an experienced cyclist who tends not be scared easily but I always feel extremely queasy when I cycle on York Way. I usually use Pancras Way as an alternative to York Way . However, this tiny street between King’s Cross Station and St. Pancras Station currently quite often comes closer to a car park for cabs than a street. In peak hours, it is almost impossible to cycle there at all. On top of that, Goods Way north of St. Pancras currently is a one way street in eastern direction and you have to cycle illegally on the curb if you want to get to King’s Place.

All in all, the docking station on Crinan Street makes the case for segregated cycle lanes in the area even more compelling. Anything else would just be irresponsible and a gamble with human life.